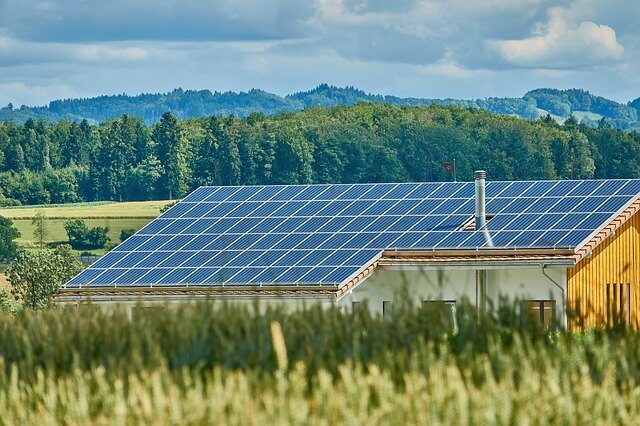 But how do solar panels work? This article will break down how solar panels function and provide you will all the details of this popular renewable energy source.

Solar power is one of the well known renewable energy sources that are currently available. Solar power is popular because solar energy is available to everyone. All you have to do is harness that energy by using solar panels.

The sun’s rays can produce nearly 1,000 watts of energy for every square meter of the earth’s surface. If we can collect all of that energy we will never have to rely on fossil fuels again.

A solar PV system generates electricity from sunlight. This energy powers your home or office and reduces your carbon footprint.

Then, the solar energy is converted into electricity. It is important to understand how solar panels work to produce energy for homes. Here is a breakdown.

Converting Solar Power to Electricity for Home Use

The process of converting the sun’s photons to electrons to generate an electrical current uses a special kind of cell. This cell is a photovoltaic cell.

You’ve probably seen one of these cells on the front of your handheld calculator or other small gadgets. When a bank of these cells are together, it’s a solar panel.

Photovoltaic cells are made from semi-conductive materials such as silicon. The silicon absorbs the photons from the sun. Photons knock some of the electrons in the silicon lose and allows them to flow in an electrical current.

Within each cell of a solar panel, there is an electrical field that streamlines the flow of electrons in a particular direction. These cells power electronic devices when the metal comes into contact with the photovoltaic cell.

Silicon is a very unique substance. It comes in a crystalline form. Each atom of silicon holds 14 electrons in a unique way of three separate shells. Two of these shells hold eight electrons each and are full.

However, the third shell holds four electrons and is only half full. Silicon shares the last shell with nearby atoms. This is what gives it its crystalline structure.

In its natural form silicon is not a conductive material. Copper is much more conductive than silicon. It doesn’t have any free electrons.

The silicon used in solar panels is not standard. By mixing the silicon atoms with other atoms, an uneven number of free electrons are created. These electrons do not form bonds meaning they are free to move around when the light hits them.

Silicon is also naturally shiny and reflective. To prevent the sun’s photons from being reflected, an anti-reflective coating is applied to the cells. Sometimes glass is also used to cover the tops of the solar panel to protect the silicon panels from the elements.

Where Does the Power Come From?

When negative and positive silicon come into contact, the free electrons on one side are immediately drawn to the other side. When the electrons mix this creates a barrier known as the electric field.

This field pushes electrons from the positive side over to the negative side but it doesn’t allow them to travel in the opposite direction.

When the sun’s photons hit the photovoltaic cell, electron pairs are broken apart. The electrons are freed and space becomes available to be filled by another electron. The electron will them move over to the positive side. This creates an imbalance in the cell.

Conductors inserted into the panel collect the movement of electrons to create a current while the electric field creates voltage. This is where the power comes from in a solar panel.

One problem encountered with solar energy is that it is often less efficient than other sources of renewable energy production. Solar panels also yield low amounts of energy compared to burning fossil fuels.

There are many reasons we see a loss of energy in this method. Here are just a few of them.

Light from the sun travels in many different wavelengths. Some of these wavelengths do not have the energy to separate out into pairs and just pass through the solar panel. Others have too much energy and energy is lost.

Using a different material could require less energy to knock electrons free, however, the voltage would be far lower.

To increase efficiency there needs to be a balance between voltage and current produced by the solar cell. Without balance, the solar panel experiences a loss of efficiency.

Now you understand how solar panels function. It’s good to know that as technology advances we will be able to create more efficient solar panels and methods of capturing solar energy. This is simply the best method we have available to us currently.

If you enjoyed this article please share it with your friends and browse our latest blog posts now.

This Is How People in an Office Can Socially Distance

The Ultimate Guide on How to Start an Assisted Living Facility

How Can You Use Inconel Alloy 625?

How effective are agents who work from home?

What You Need To Know About a Product Liability Case