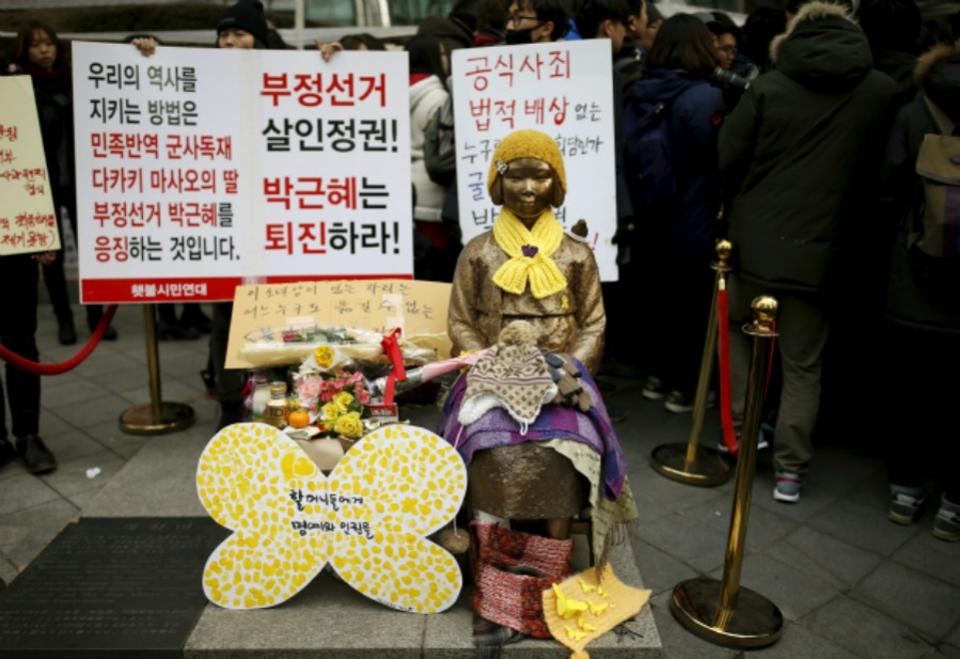 When the announcement was made about the agreement Japanese Foreign Minister Fumio Kishida formally agreed the Japanese Imperial army had involvement in the commission of atrocities before and during World War II, and acknowledged the resulting dishonor to Korean women. Consequently, Prime Minister Shinzo Abe expressed sincere and heartfelt apologies as well as deep remorse to all of the women who underwent immeasurable and highly painful experiences during this unfortunate time. In addition to the apologies and acknowledgment, the nation of Japan also agreed to make a onetime monetary donation to a foundation set up by the South Korean government. The foundation’s purpose would be to provide for the care and needs of the former South Korean comfort women. The donation, which at the time of the announcement was stated to be ¥1B (approximately $9M US). The agreement was made with the understanding that the South Korean Foreign Minister Yun Byung-se would let the entire issue be put to rest, and that he would start pursuing a peaceful solution to the further connected issue regarding the removal of a statue dedicated to the Korean comfort women which sits in front of the Japanese embassy in Seoul.

The issue is that even after six months the agreement remained yet to be formally implemented by both parties. The growing discontent among the peoples of both nations as well as the increasing popularity of Ianfu statues in places all over the world, has put in jeopardy the possibility that the agreement will ever be honored, and is putting the South Korean-Japanese relations in a very challenging position.

There are two very different positions on what the agreement means on the opposing sides of the issue. While for the most part Japan sees the agreement as being a precipitator of better relations with Seoul, the position of Abe has not changed. In a speech that he gave to the House of Councilors, the upper chamber of the Japanese Diet Legislature, he stated that the agreement does not constitute a confession as to the involvement of Japan in sex slavery, or any other type of war crimes. This speech and position has led to the Korean people and the Korean government being livid. This condition has been made more contentious by the fact that every single member of Abe’s cabinet has stated on numerous occasions that there is no valid and verifiable evidence that the Japanese Imperial Army and Navy ever coerced Korean comfort women into sexual services.

Abe has stated that he views the agreement as necessary to the continued development of the long-standing relationship between Japan and South Korea. Seemingly in opposition to Abe’s nationalist agenda, there have been times when citizens of Japan have protested the agreement in the streets of Tokyo. In sharp contrast the Korean people seem to be at odds over almost every aspect of the comfort women issue. 50% of the Koreans who were surveyed in opinion polls stated that they do not like the agreement, and 66% of those asked, stated that they do not want the Korean comfort women statue removed from in front of the embassy. It should be noted that there is a large disconnect between generations, as younger Koreans are more adamantly opposed to the relocation of the statue than those of previous generations.

The loss of President Park Geun-Hye’s Sanora Party in the April 2016 elections, further muddies the chances of the agreement being formally implemented. The party which took the majority control of the legislature, the Minjoo Party, has called for the agreement to be renegotiated. The second largest opposition party in South Korean, the Peoples Party, also has stated on many occasions that they oppose the agreement, and want more support for comfort women stories and public awareness of comfort women testimonies. A large portion of the Korean population has called the agreement whitewash for the bad behavior of the Japanese Imperial Army and Navy. Some groups have even called for the United Nations to get involved and confirm if the agreement meets the internationally recognized human rights standards.

One of the major points of contention between the two countries revolves around the memorial statues dedicated to the Ianfu both in South Korea and in other locations around the globe. These statues prove to be a sticking point for the soft power image that Japan has been trying to develop in the international community. There are a lot of Asian countries who have put up memorials in commemoration of the women who were subjugated. There are even memorials to the Ianfu women in western countries. In fact, the United States has the largest number of memorials to comfort women outside of Asia. The growing support of comfort women and the significant historical weight that the issues carry has further complicated the entire conversation that Japan has hoped it would by now be dominating with its own position.

The simple fact is that the South Korean comfort women issue has now gone global, and with increasing tension on the subject on both sides, it is clear that the issue is going to drag on for a long while. While neither country has expressed negative comments about the issue or the agreement in the public international forum, the tension over the underlying concerns is rising. It is critical that the governments work to implement the agreement as quickly as can be done in order to not let the momentum and perspective of the issue that has been gained be lost.

What to Do When the Weather is Too Hot to Handle