In some domestic cases, where the marriage doesn’t seem to work, the necessity to kick out a spouse may arise. Kicking out your spouse, also known as a dwelling exclusion, is an order that requires a spouse to leave their marital home. A court usually issues this after it has drawn the conclusion that it’s safer for one party if the other leaves.

It’s also important to note that some people could opt to change locks and to keep their spouses out of their bedroom or, worse, home. While this could be a simple way to do it, it may be illegal. The locked-out spouses may seek legal action against you, and if granted by the authority, they could break-in. The authority could also order you to give your spouse the keys to the new lock.

Ways to Kick Out Your Spouse

The best way to obtain dwelling exclusion against your spouse is through legal methods. The separation period is usually a difficult time for couples and other parties, like their children, because no one would be willing to leave the residence.

The court, however, doesn’t have the right to offer occupation exclusion orders unless they see it necessary. In case the need arises and you need your spouse to leave the house, there are several ways on how to kick your spouse out of the house legally. 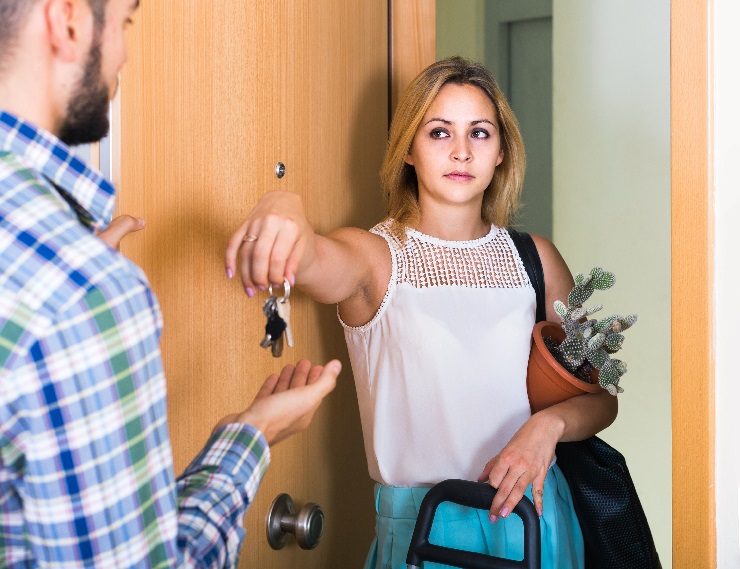 Here are some of them:

The domestic violence act is the most effective way of getting a spouse out of the house. In case of domestic abuse or hostility towards a spouse, children, or pets, you can seek your partner’s eviction. This is usually treated as an emergency case, and the victim may ask the court to hear the case without notifying the respondent. The victim will then be required to provide evidence of abuse.

One fault of domestic violence cases is false accusations. Spouses might trigger altercations to get a basis for starting a dwelling exclusion. To avoid this, the court will do a thorough check to prove that the other partner is indeed a threat. If there are cases of abuse, you should seek advice and report to the authority to get a temporary restraining order.

An occupation order usually restricts occupation or access to a property. To file this, you need to fill a form titled ‘an application for an occupation order.’ You don’t need to be the owner of the home, but a beneficiary of the right to occupy through the marital act can also apply for this document.

Before granting the order, the court has to consider the harm before and after the order is issued. The court will consider factors such as the health of dependents, the couple’s financial resources, and their well-being. Due to the complexity of the occupation order, it’s advisable to file it through a lawyer. This may help tip the case to your advantage.

A non-molestation order is an injunction served to a person who poses a threat to you or has previously harassed or abused you. If you get an order against your spouse, it may prevent them from contacting you or accessing your home.

Other times the order may only limit your spouse from accessing some part of your house but still allow them to live there. However, if they break the restriction, you’re obliged by the law to kick them out.

4Agree with Your Partner

After a divorce, both partners might try and hold onto the house and children. Letting go of the house could be difficult as, most of the time, the one who moves out is usually disadvantaged during custody fights. Some countries’ family laws may state that the one who spends less time with the kids should pay for upkeep.

However, couples could agree on who should move out of the house. This will require out-of-court agreements between both parties. Agreements could be about child custody and support. You could agree with your partner when they could visit the children, on what days the children could stay with them, and the financial support offered.

An advantage of such agreements is that the spouses can still maintain a healthy relationship even after moving out. This display of respect would be beneficial to their children. It may also help save costs such as court fees on custody fights and occupation orders.

Getting a divorce is another simple way of kicking your spouse out of the house. The divorce problem might be complex, but getting a dwelling exclusion after a divorce could be easy. Whether only one spouse or both of them want a divorce, several procedures are to be followed.

During the divorce, the court decides on the separation of property, custody of children, and child support. In property ownership, the court will allocate the house to one spouse or, in some cases, ask them to sell the house and share the proceeds. In case the house is allocated to one spouse, the other is required by law to move out.

Why You Should Consider Kicking Your Spouse Out

Some people may decide to stay with their partners through the tough times to make ends meet. However, there are occasions that you may want to consider legally kicking your spouse out of the house.

Such periods could be beneficial, and here are reasons to consider doing it:

When the need to kick out your spouse arises, then you should take the necessary steps for your safety and that of your dependents. However, you should also think about your actions to ensure it isn’t an emotional rush and it’s the best step to take.

During the legal process, you need to seek advice from your lawyer about how the separation works. This will help prevent unnecessary fees and damages that may be incurred during the whole course.

How to Get Car Accident Victim Compensation

Best Ways to Make Money with Bitcoin in 2021

How to Get Car Accident Victim Compensation