I have always loved traveling. However, I have never ventured out to a new city or country without company. While traveling with friends and family is nothing less than fun, I had always craved to go on a holiday on my own. So, when it came to choosing my first solo holiday destination, Singapore was my first choice. Singapore is considered to be one of the safest cities in the world, and I completely agree with it after you my Singapore visit. I never faced any problems, be it in the middle of the day or late into the night. On the other hand, the people were extremely friendly and helpful. Moreover, Singapore is a wonderful place and a paradise for travelers. I was exhausted at the end of each day, but the list of attractions was endless. Here is what I did during my Singapore holiday.

My Singapore visit lasted for five days. Each day was exciting and I could cover a lot of important places. I walked a lot while sightseeing in the city (and I recommend this is the best way to explore the city although it is tiring), while I chose the public transportation and even the cab (a few times) for traveling long distance. Here are few of the places that I visited in Singapore. If you ever visit Singapore, these are the places that you should not miss.

Gardens by the Bay

I had reached my hotel in Singapore at 5 in the evening. Although the flight was tiring, I was so pumped up to start my solo holiday that even the comfortable bed in my hotel room did not seem too inviting. So, I decided to visit Gardens by the Bay, a place I had read so much about. When I arrived at the entrance, I was awe-struck. I realized that the numerous articles that I read about Gardens by the Bay did not do any justice to the actual thing. The place is nothing less than marvelous. 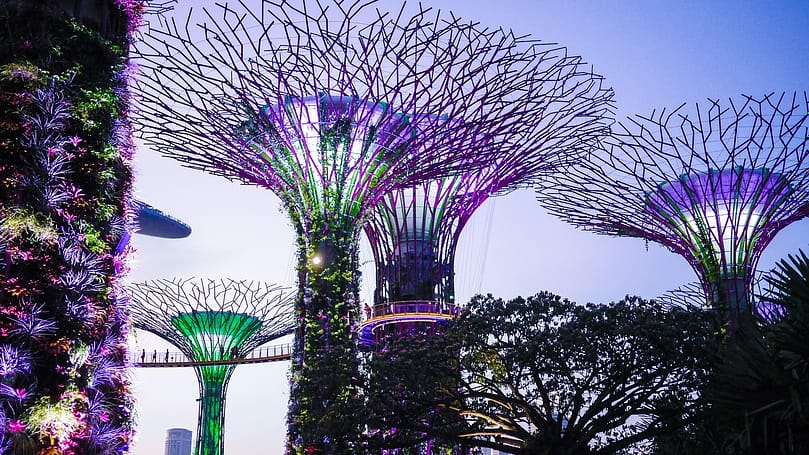 It was a delight to walk around the 101 hectares garden. While you can see the tall skyscrapers and modern structures of the city from the park, it is an entirely different world inside, truly a perfect haven! The Flower Dome and Cloud Forest conservatories were exceptional but the true hero of the garden is the Supertree Grove. And the best part was that they were lit up as soon as I reached the park, making it one of the highlights of my visit. I spent a whole lot of time at the conservatories and the Supertree Grove and did not get the chance to check out the Horticultural themed gardens and the flower market. If I ever visit Singapore again, I would love to explore the Gardens by the Bay for an entire day.

Another memorable evening that I spent in Singapore is at the Marina Bay. One of the swankiest areas of the city, Marina Bay comes alive at night when all the buildings and areas sparkle with lights. Complete with a waterfront promenade, Marina Bay is a place you can come and spend time without doing anything. The splendid sights of the place are enough to pass time easily. However, one of the highlights of visiting Marina Bay is that you get to see one of the largest water and light show. For 13 minutes, I was transported to a different zone as I watched the magical performance that combined water, light and music beautifully. The state-of-the-art technology and the surround sound system made the show spectacular. And the best part is that it was free. As I had arrived early, I got to choose a good place to watch the show. The place becomes really crowded by 7: 45 and the show started at 8 PM. So, if you want to get a good view, I would suggest you to come early. After the sound and light show, I head to KU De TA Club Lounge at the Marina Bay Sands SkyPark. This came strongly recommended by a friend who had visited Singapore a few months back. Although it was expensive and burnt my budget a bit, it was worth because of the view. I had a glass of wine while enjoying the gorgeous view of the city.

After I left the Marina Bay Sands, I started walking towards Merlion Park, which is one of the major landmarks of the city and something I could not miss. It took me 21 minutes to walk from Marina Bay to Merlion Park but after dinner, the walk did me good. Also, I enjoyed the beautiful sights of the city. It was pretty late when I reached the park but there were still a few tourists and locals at the place. There are two statues of Merlion, a mythical creature with the head of a lion and body of a fish, at the park. Spouting water from its mouth, the original statue stands tall at the height of 8.6 meters. The other statue is that of the Merlion cub and is only 2 meters tall. I was so fascinated by the place and took dozens of pictures. I spent almost an hour at the Merlion Park checking out the statues and the nearby sights before calling it a night and heading to the hotel.

I spent an entire day at Sentosa Island, an island resort that is built purely for the purpose of entertainment. Although the island is connected to the mainland of Singapore by road, I took the opportunity to ride on a cable car and I am so glad that I did. The view was amazing and I was simply mesmerized. Before I arrived on the Sentosa Island, I had known that I would not be able to cover the entire place. Not only did I not have the time, it would also have proved to be really expensive. So, I had planned my day well. I started my trip by visiting the Butterfly Park & Insect Kingdom, followed by Fort Siloso, Madame Tussauds, S.E.A Aquarium, Sentosa Nature Discovery and Trick Eye Museum. I wanted to check out Wings of Time and Universal Studios, but sadly they would have to wait for the next trip to Singapore. Still, I had a wonderful time visiting the places and I would say that I loved being at Sentosa Island. I can easily say that it is possible to spend your entire holiday in Sentosa Island!

One of the best places I visited in Singapore in Chinatown. Different from the stylish side of the city, Chinatown has its own charm and reflects the Chinese culture and lifestyle of the city. Just walk around Chinatown and you would get to do so many things, right from sightseeing to shopping. My first visit was to The Buddha Tooth Relic Temple. While the temple is stunning from the outside, the interiors are beautiful. I also visited Sri Mariamman Temple which is the oldest shrine in Singapore and the worship place for Tamil Hindus in the city. Few other places that I visited here are Singapore Coin and Notes Museum, Singapore City Gallery and Red Dot Museum. However, the best part was the Chinatown Street Market where I bought some trinkets, gifts, and souvenirs to take back home. If you shop in Chinatown, do not forget to bargain. Also, do check out the street food carts. I had a delicious lunch of dim sum and noodles here. Although I was super tired by the end of the day, I went to bed with a happy heart.

Apart from the above-mentioned places, I also got to visit Singapore Night Safari, Jurong Bird Park as well as Clarke Quay and Riverside. I also did some shopping in the city. Although there are several shopping malls and markets in Singapore, two places you must check out are Orchard Road and Bugis Street Market. While the former is where you can get all the international brands, the latter is the place where you would get great products at cheap prices.

My holiday to Singapore opened the doors of solo traveling for me. It was surely one of the best and the most memorable holidays of my life. Still, there were several things that I had to miss because of time constraints. So, I do intend to visit this amazing city once again, soon!