The availability of high-tech educational toys in the market isn’t really a problem anymore. A huge number of them are available in the market these days that vary from the likes of the LEGOs to the likes of the Ozobots. But there’s only one downside associated with these toys that you need to realize at the start itself, and that is “PRICE.” These toys are hugely overpriced, and sometimes they go way beyond the financial capability of a middle-class family.

So is there a solution?

ThinkFun’s Code Master can be that solution for you.

ThinkFun’s Code Master is a traditional board game capable of teaching basic programming concepts to kids (of 8 and above) in a whole new manner.

The game is a single player game based on puzzles. The players have to use their coding logic to get to the solution (even though most would not be even aware of the same).

ThinkFun’s Code Master comes with 60 playing levels in an ascending order of difficulty. The entire game might appear too intimidating at the start, but the instructional manual (that comes with it) is more than capable of helping the players out, at least at the initial stages of the game.

The in-game puzzle can also show the exact location of the places where the players have to place the game avatar, portal and the crystals on the map.

The puzzle should also indicate the tokens that the players need to deploy on the basis of the requirements of a specific level. Along with that, there are guide scrolls that present a flowchart of the program to the players that they need to do for achieving the target specified by the level itself.

So you see everything’s right there in the game itself. Hence, the matter of “how you do it” ceases to exist anymore.

ThinkFun’s Code Master comes with the following items in its box: 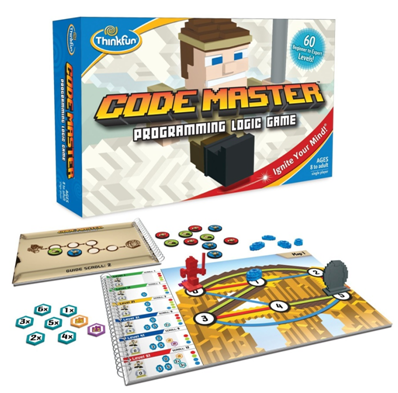 How to play the game

The players have to set up their levels first. Like we already said, the levels are in an ascending level of difficulty; meaning, level 1’s the easiest and level 60’s the hardest of the lot.

The initial levels (level 1, 2, 3, 4, 5….) are simpler, and are typically based on linear and simpler sequence of instructions. Their complexity increases (with the inclusion of conditional branches and loops) with gradual progress (in levels) over time.

The players should use different colored chips to guide their avatars along the colored paths on the map to the portal in the end. Reaching the portal signifies successful completion of a level according to the laws made by the manufacturers of the game.

In this step, the players have to set the tinted chips in order by contemplating the final result of the program, in advance.

The players will also have to choose the right path on the map to lead the avatar to its specified destination. There are a few possibilities of “crystal picking” on the way. The in-game manual can help you with that.

For program execution, the colored chips have to be put into use. The players have to move the avatar across the different colored paths specified by them in the previous step itself. If the avatar reaches the portal, the level’s done for good.

If it fails to reach the portal, the entire process has to be revoked from the start again.

So to sum up, we can easily say that ThinkFun’s Code Master can definitely do the trick for the kid, especially when early coding lessons are concerned. So what are you still waiting for? Get one of your own NOW! The price won’t bite.

25+ Amazing Games Like Pokemon Go You Should Install & Play

Can You Provide To Publicize Your Book?