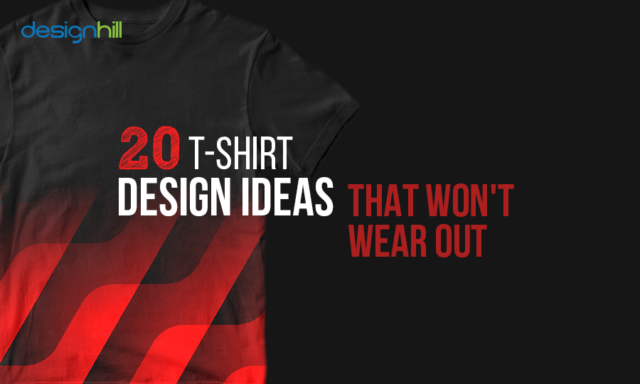 T-shirts are everyday wardrobe staples. Why? It’s because they are versatile and incredibly comfortable. On top of that, t-shirts are like a blank canvas for ideas to be portrayed creatively. It’s something no other clothing can provide. It means that t-shirt design has endless possibilities!

From music bands to basketball team to businesses to bachelorette parties to charity events, creative t-shirt design makes a huge impact. No matter what message you want your t-shirt to convey, a matching design style delivers it smoothly.

To help you out, we have created a list of 20 t-shirt design ideas that are evergreen and won’t wear out. They are certain to bag your attention.

YOLO (You Live Only Once)

We all agree with Drake’s mantra — YOLO. Isn’t it? His YOLO became so popular in 2012 that it bagged the ‘Word of the Year’ nomination by none other than the American Dialect Society. Since then it appeared on the t-shirts around the world.

Don’t you want to create something as simple but memorable like this? Play with colors to grab attention even with a simple word. This creative t-shirt design should find a place in every partygoer’s wardrobe.

Created by legendary WWF/WWE wrestler — Stone Cold Steve Austin, this t-shirt design is simple but memorable. Austin defeated Jake Roberts aka “The Snake” in 1996 during a historic match. His name coined with biblical verse is a winner!

So, next time you go to any WWE or WWF championship match, wear it to bring the blast from the past.

Creative symbols have always found a place in t-shirt designing. Anarchy symbol is a great example of it being evergreen. Even after so many years, t-shirts showing this symbol haven’t gone out of style. Do you have a symbol in mind? Don’t wait! Give it a creative twist for your next t-shirt design.

It may seem a simple text but it has a great meaning and purpose. The popular “Wake Me Up Before You Go-Go” video had Wham wearing this t-shirt. The design was created by Katherine Hamnett. It symbolizes fight back against social issues — suicide and drug abuse.

Wouldn’t you want to create something highlighting social issues?

Metallica band is unforgettable, isn’t it? Like its music, the t-shirt having Metallica logo is pleasurable. The iconic design is still in vogue.

Think something like this for your creative t-shirt design.

We all enjoy festivals and celebrations. This t-shirt design captures the essence of the Woodstock festival. With a simple and minimal design, it remains a favorite for American people.

If you’re organizing an event like this, create memorabilia for the audience. A shirt with great design is the ideal souvenir. However, you need to use powerful imagery that focuses more on art and not the sales pitch.

Creative typefaces cast a magic spell when printed on a t-shirt. Take, for example, tees with Stussy prints. The street wear brand was kicked off by Shawn Stussy in 1980. He got his last name imprinted on tees. It was all part of a promotional campaign for custom surfboards that he owned. Even after thirty years, it’s still in vogue.

When it comes to graphic shirts, one cannot forget Che Guevara tees. You can take inspiration from its graphic to design something out-of-the-box. Che Guevara — the Marxist activist’s graphic became popular among teens and young people. And, it’s still popular.

Next time you think of choosing a graphic, pick something that’s timeless.

The American hip-hop group Run DMC popularized this tee. Their fashion statement was as fresh as their music. The RUN DMC text put on the shirt, of course, felt like an ad but soon after its launch, it became famous. Their insignia became a style rage.

You can turn any insignia or even brand name popular if you know the right placement.

How about taking a catchphrase from a popular movie, band, or even TV program and turning it creative? The 80s greatest catchphrase — Frankie Say Relax printed on tees was a fashion rage. The British Band — Frankie Goes to Hollywood released their song Relax that turned out to be a huge hit.

The block letters highlighting the phrase gave rise to popular fashion trends. It’s still prevalent. Play with bold, block letters and create something as timeless as this tee.

Bob Marley’s graphics on tees are timeless. Take advantage of it by creating a consistent concept which not only looks unique but superior. A new and improved design would surely grab the attention of the audience.

Superheroes shirts are quite popular among people of all age groups. Take inspiration from such shirts and give it a hilarious turn. The Mighty Mouse shirts are the best examples. Of course, it’s a TV show that portrayed a mouse as a superhero fighting everything from Nazis to cats. You have seen Superman taking a flight in his signature move. Have you seen the Mighty Mouse doing the same?

Add an element of fun to your design concept. It will make it different as well as unique from others.

Astronomy has millions of fans out there. Of course, all of them cannot take a trip to the moon or the Mars. But they can satiate their inner astronomer with a tee of the same. If your customers love astronomy, turn this idea into your favor.

Remember, with Tesla and others being determined for space exploration, the competition is going to intensify in the coming days. If you start off today, it’s sure your design will find a place in people’s wardrobe.

Sci-fi fantasy theme has always been a favorite for designers. If you want to create beautiful designs, fantasy themes are full of inspirations.

Camo tees are back in fashion. Nothing says ‘army’ loudly than olive green army patterns. As it has become a part of mainstream fashion, you can find many great concepts in it.

Levi’s is one of the popular clothing brands. There is no surprise that the brand’s logo would become a fashion statement for people to show off. Its iconic logo helped it to create t-shirts that remain in vogue even after a long period.

If you think your company’s logo has that X-factor, bring it on a shirt.

Have A Nice Day

Have you seen a t-shirt with this text and a smiley face? This design concept made its way back in the 1970s. Even the movie Forrest Gump is also credited to bring this tee on the world’s fashion map.

So, make use of emoticons and create designs that people will cherish.

Superhero movies have inspired many t-shirt designs, there is no doubt about that. But do you know there are many TV series that have done the same? Look around and you will find inspiration scattered everywhere.

Stranger Things creepy creatures have turned out to be the best element for t-shirt designers. Not only it but characters like — Eleven — can also be a source of inspiration for your design concept.

Remember, these characters never go out of style.

Whether you want to design a creative t-shirt for profession or pleasure, what you create can disrupt the design world.

Look round and find inspirations. Even an ordinary thing can inspire you to create great designs that would not wear away.

What Is Considered the Best Age to Get Married?

How to Design Your Own Unique Photo Wedding Invitations

How to Stay Creative When You’re Stuck at Home