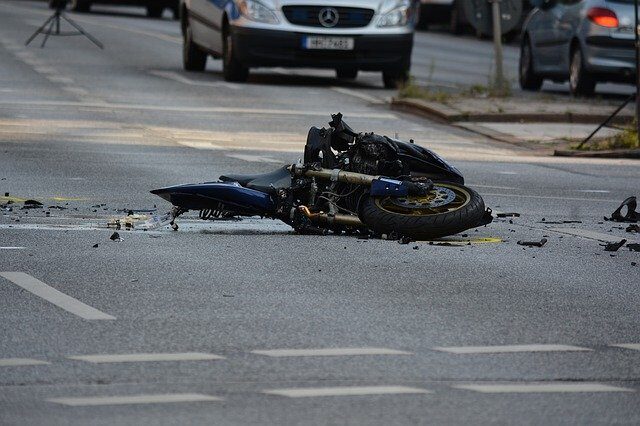 Did you know that close to 4,985 motorcyclists died on American roads in the year 2018 alone? Today, motorists are 27 times likelier to die in a car crash compared to other car occupants. The general and often misinformed assumption is that motorcyclists are careless on the roads.

Such attitudes often inform the attempt by at-fault drivers and some insurance companies to shift blame to motorcyclists whenever accidents occur. Before you hit the road with your bike, it’s important to understand such misconceptions.

Your understanding of road accident law can help you push for justice after a motorcycle crash. But how can you establish fault after a crash? This article delves deeper into at-fault laws and what you ought to do after a motorcycle accident.

No one wants to get into an accident, but at the times, a motorcycle crash is inevitable. The consequences of such crashes can range from minor bruises to fatality or anything in between. Astronomical medical costs and lost productivity can be overwhelming.

When seeking compensation, proving that a motorcycle crash was someone else’s mistake can be daunting. The good thing is that at-fault laws exist to ensure that the at-fault driver bears the burden of compensation.

When you call in a car accident lawyer to file an at-fault claim against a negligent driver, you rely on the law to achieve maximum compensation. The lawyer tries to establish a basis for compensation for both non-economic damages and the economic damages suffered.

The threshold for injury often plays out when seeking compensation after an at-fault accident. Your lawyer helps you identify the circumstances and the extent of negligence attributable to the at-fault driver at the time of the motorcycle crash.

The Elements of Negligence

When you commence seeking compensation after a motorcycle accident, your defense team must prove negligence. Here’re some of the elements of negligence that can twist the case in your favor.

Your motorcycle accident attorney must show cause that this legal duty existed. Once the defense team ascertains this fact, the next step is to show that there was negligence.

Aspects such as over speeding or driving an unroadworthy car are confirmation of a breach of legal duty. You only need to confirm this breach for you to have a basis for a personal injury lawsuit.

You Suffered Damages Due to Breach of Duty

When you are a victim of a motorcycle crash, the risk of damages range from minimal to extreme. It’s upon you and your lawyers to further prove that the breach of duty caused the injuries. The damages suffered include economic and non-economic injuries.

Economic costs also refer to the damages on your motorcycle. Some instances of motorcycle accidents may lead to a complete write-off of the motorcycle. Your motorcycle attorney only needs to show that the accident contributed to economic damage for you to get the compensation.

Steps in Determining Fault After a Motorcycle Crash

Once a motorcycle accident lawyer is on the ground, they will often follow these steps.

Investigate the Scene of the Motorcycle Crash

The scene of the crash often tells a tale of the events leading up to an accident. Your lawyer will have an interest in the scene of the accident and the aftermath. Most lawyers either send investigators or collaborate with specialists to assess such accident scenes.

The investigation process looks at the road layout and the intersections close to the accident scene. Other factors include the positioning and timing of road signs and traffic lights. Lawyers are also often on the lookout for skid marks and any damage to the curb barriers.

Any information from such an assessment can help determine the extent of culpability. The lawyers then take photos of videos of the scene to support the narrative of breach of duty.

Examining the Vehicle(s) in Question

Most seasoned motorcycle accident lawyers will further examine the vehicles involved in the accident. The idea is to evaluate the underlying condition of the vehicles vis-à-vis your motorcycle. The location of the damage and the presence of defects can further help support your case.

The need for this additional evidence is to be prepared for any attempt to contest liability. With a comprehensive report regarding the Vehicle’s condition, you have a guarantee that the at-fault driver will admit liability.

When a motorcycle crash occurs, the first responders are often witnesses. These individuals have first-hand information on the events leading up to the accident and the aftermath. There’s a need to consider the eye witness reports following an accident, given that it helps establish the level of fault.

Witnesses’ reports are valuable when following up on a motorcycle crash. Lawyers understand the need to have such eyewitness reports beforehand. The approach ensures that your defense team prepares for any counterclaims during the legal process.

The sole purpose of this entire process is to ascertain liability on the driver. Your tort claim against the at-fault driver must be beyond reproach. The idea is to establish fault by investigating the driver’s actions.

Some of the most common signs of negligence when dealing with an at-fault driver include over speeding, erratic driving, and dangerous overlapping.

A driver may also show signs of negligence if they were drifting into other lanes before the accident. Instances of disregarding traffic rules, signs, and signals could also help affirm liability. The combination of physical evidence and eye witness testimonies can confirm the claims of fault.

Considering the Involvement of Other Parties

Such parties may either have authorized an unqualified driver to drive or failed in their supervisory role. Further, your lawyer may focus on these third parties if the commercial vehicle had other underlying mechanical issues. However, this may be hard to prove at times.

Determining who is at fault in a motorcycle crash is never easy. You might have adequate supporting evidence but still, fail to secure compensation. It takes a seasoned lawyer with a wealth of experience to help you secure the necessary compensation.

Before selecting a lawyer, consider their years of experience in handling motorcycle accident lawsuits. Further, ask about the number of successful lawsuits where the victims got compensation for their injuries. You may also need to consider the reputation of the lawyer in question through reviews and recommendations.

A reliable motorcycle accident attorney should also be easy to search and find online. With close to 1.3 million practicing lawyers in the United States, it’s important to work with an easily accessible attorney on online platforms. This gives you a chance to read client feedback on attorney’s services while also learning more about the offered services on their website.

Further, a seasoned lawyer should be honest about their availability. You don’t want to deal with the aftermath of a motorcycle crash while still dealing with a nonresponsive and elusive motorcycle attorney. In the end, you should also engage a lawyer who quotes reasonable prices.

Get a Motorcycle Attorney Today

Motorcycle accidents are common in most American roads. Most time, riders are on the receiving end, following claims of carelessness while on the road. Even so, many accidents are also due to negligent drivers.

Have you been in a motorcycle crash and wonder how to kick start the process of seeking compensation? One of the first steps you must take is to call in a motorcycle accident attorney.

You can read much more about fashion, beauty, general health, and fitness in our subsequent articles. Keep exploring for more.

The Employment Law and Labor Structure of Toronto