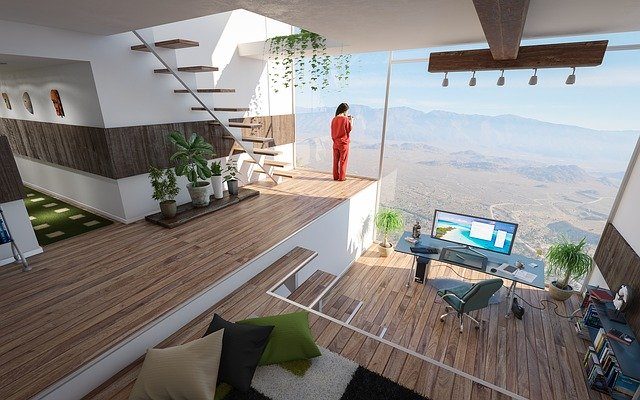 The main difference specifically refers to the era that the design is inspired by, modern design follows design concepts and interiors of the early 1900s to 50s, compared to contemporary design belonging to the current period and fashions that go within this.

This still doesn’t make it as easy to tell the two apart, one of the differences that can help you to differentiate between the two is the architectural lines used. Modern homes make use of straight lines whereas contemporary homes will have sweeping, curvaceous lines.

Modern, with its slight misleading name, doesn’t reflect the current times but the modernist movement of the 20th century. Designers wanted to develop a new norm in a world that was seeing great changes since the industrial revolution.

Where The Modern Design Concept Came From

Originating from German Bauhaus and Scandinavian design concepts, the new design focused on minimal features and greatest functions, compared to years previous that made use of heavy textiles, detailed carvings and wood tones. The style is a predeccesor to contemporary design, one of the reasons why the two are easy to mix up. Key figures of modern design are Charles and Ray Eames, Le Corbusier and Florence Knoll.

The distinct style that came from the era was simple forms, functional pieces, earthy palettes, streamlined silhouettes and natural materials such as wood, leather and stone.

The Start of Mid-Century Modern

From modern came the design trend, mid-century modern, which was developed specifically in the 50s and 60s. Although in the interior design world, the term modern can usually encompass both.

The Definition Of Contemporary

It belongs in the present, contemporary designs reflect the trends that are popular right now. Since the 70s when the idea was born, it is always changing and evolving. What was considered to be contemporary design in the 70s, would now be seen as vintage.

Contemporary design favours smooth surfaces and distinct, more curvaceous lines. A contemporary space is created to feel calm, collected and mature with a dominant neutral colour palette. New age materials are an essential of contemporary design with a lot of glass and metal being used.

Contemporary interiors make use of minimalist furnishing, that are essential and functional. Designs have noticeably Egg Chairs inviting shapes and fluid forms compared to other furniture.

It borrows qualities from a range of trends from modernism, minimalism, art deco and many other global styles, without focusing too much on one specific trend. It isn’t uniform, it’s very individual as the definition is fluid.

Even though modern and contemporary design can be difficult to distinguish, you can learn here that there are obvious differences, once you know what to look out for.

The Golden Rules of Moving a House

4 Time-Saving Essentials Every Mom Should Have in Kitchen

What to Do When Concrete Blocks Drains

Beat the Heat with Table Fans