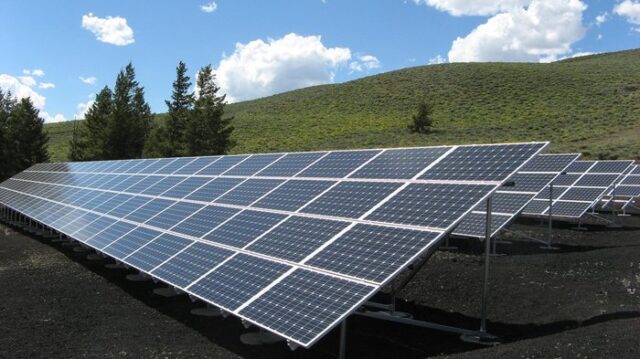 Do you want to go green? Do you want to save money in the long run or get paid to produce power? Then you may be interested in installing solar power.

But before you install the system, maybe you’d like to know more about the setup. So how does solar energy work?

How Does Solar Energy Work?

Solar energy is created when sunlight hits solar panels. The sunlight nudges electrons into motion, producing a current. The current then needs to be converted to be used.

Solar panels are made of photovoltaic cells, which produce the electricity. Each cell has two layers of silicon.

The top layer of silicon carries a negative charge, and the bottom layer carries a positive charge. An electric field is created where these layers meet.

When sunlight strikes the cells, electrons are knocked loose from the silicon. If the cell is connected to a circuit, the electrons flow around the circuit, creating an electric current.

This conversion is done by an inverter. The inverter uses switches to rapidly change the direction of the current so that it alternates, creating AC.

Tying Into the Grid

Solar power is uneven since the electricity is only produced during daylight. Storing the electricity for nighttime use requires an expensive battery setup. However, there is another way.

Most solar power systems tie into the local electrical grid. With this setup, a home system can produce electricity during the day and feed any excess electricity into the grid. Then, after dark, the home draws electricity from the grid for nighttime use.

Solar power systems cost several thousand dollars, which may make them seem too expensive. However, there are ways to bring the cost down.

The federal government currently offers a tax credit for homeowners who install solar power, although this will be phased out after 2021. Many state governments also offer tax credits, including Arizona, Utah, and California. You can visit the clean energy site DSIRE to learn more about incentives offered by state.

In addition to receiving tax credits for installing solar power systems, you can reduce your electricity costs through net metering. When you feed excess electricity into the grid, you receive a credit from the utility company for that amount of electricity, which pays for electricity you draw from the grid later.

Some systems produce enough energy during sunlight hours to cover the cost of a whole year’s worth of electricity usage.

If you like the idea of producing clean energy and never paying for power again, you might be wondering, “How can I find solar panel companies near me?” Google Sunroof is a good way to learn about your area’s potential for solar energy and search for providers.

Once you’re answered the question “How does solar energy work,” it’s time to learn whether solar power is right for you. When you do your research, you can calculate whether installing solar panels will end up saving you money in the long run. Your big investment might just pay off.

If you enjoyed reading this, check out our blog for more interesting articles.

A Short Guide to Renovating Your Kitchen

The Importance of Air Conditioning In Your Home And Office

Know Which Appliances Can You Run on 1kva Inverter