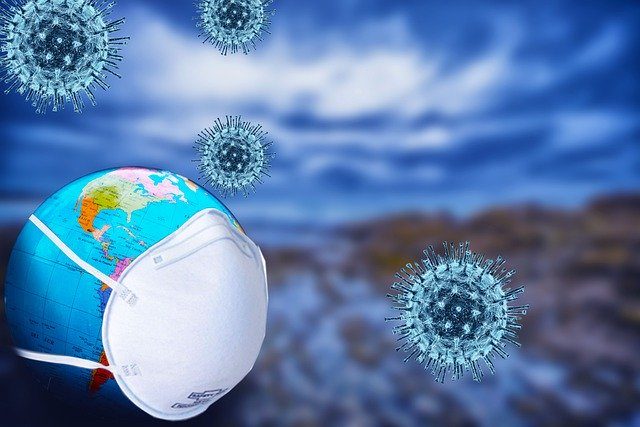 To understand the potential threat of the coronavirus on a National level, it’s necessary to appreciate the buildup over time. Much like with a slow cooker that seemingly doesn’t cook food very quickly in the early stages but completes its cycle over the subsequent hours, the enormity of the potential threat represented by the coronavirus isn’t initially obvious to everyone.

Some of the current measures can even be viewed as an overreaction by some people due to a lack of vision for bad, nefarious and/or terrifying consequences of doing nothing.

In this article, we look at how the virus could spread and how it becomes a growing threat to national interests as it does so.

How Threatening Does Corona Seem to People?

That depends on whom you ask. To some people, it seems like a complete overreaction. Regular influenza, aka the flu, took the lives of 8,511 Canadians just last year alone. They may cite that even crossing the road to walk to work is riskier perhaps than the chances of catching the coronavirus.

Yet it shouldn’t escape any Canadian’s notice that 6 cases have been declared at a care home over in Vancouver recently, so this is anything but an isolated problem or an invisible one.

Is It a Problem with Clustering, Specifically?

One of the concerns is whether it’s safe to associate with other people, especially in groups of significant size. Of course, this affects everyone if that’s the case.

Government bodies meet regularly with other departments, agencies and third parties. What do they do to protect themselves from taking a meeting, someone becoming infected, and then subsequently infecting their co-workers?

The potential is there to shutter whole government departments with interdepartmental meetings and those between agencies too. It’s not at all alarmist to consider the possibilities in this regard.

Cruise Ships and Other Packaged Travel

Travelling on a cruise ship is a popular thing in Canada. There are many places to travel to which are difficult to include in a single trip otherwise. Unfortunately, cruises highlight the problem with travelling together sharing the same general living spaces, air supply, food sources, etc.

Some of the passengers from the Grand Princess cruise ship figured this out too late. They have had to be evacuated from the cruise ship and then medically secured for observation and quarantined for the already established 14-day coronavirus incubation period.

The same issue is a concern with all flights, both national and international ones, where the air recirculation process coupled with a passenger sneezing and unintentionally spreading their germs into the air and breathedby other passengers can, unfortunately, lead to multiple positives for the virus. Indeed, airlines are cancelling many flights globally (sometimes due to lack of capacity and other times expressly for safety reasons) and their stock prices have declined 20-30%.

The Collision conference held by Google has been cancelled. It’s not just this event, but scores of events just in the tech space alone which have been scuppered because of fears of spreading the virus.

Of course, the cancellation of the events also affects the hospitality industry with hotel room bookings being cancelled by the thousands. Local restaurants that experience a boom in visitors during these types of conferences are also badly affected.

Is this an overreaction?

Will Coronavirus Lead to Looting or an Escalation in Crime?

The possibility that the coronavirus can have unexpected consequences like an increased rate of crime, particularly looting of stores, robberies or burglaries, is an interesting one.

Wilfrid Laurier University has a program on Public Safety at the master’s level, so they arecertainly in a good position to point out the risks. These commonly include:

While it may seem far fetched to suggest that a virus can become such a problem nationally that Canadian police are switched to an emergency management role, it’s not. Over in the UK, it was pointed out that should the current virus become a pandemic, it’s likely the crime prevention unit will be significantly reduced, and the military may be used to help keep law and order. Whilst the UK and other countries are not close to that stage currently, it does demonstrate that is has been considered by other countries already.

It’s only necessary to look at previous riots in North America where law enforcement was unable to initially contain widespread rioting across major cities to appreciate that events can get out of control quickly. While the police can be sent to the worst areas to contain the violence, looting or general opportunistic disorder, they cannot be everywhere.

Also, they will have too few remaining resources to investigate the worst culprits and bring them to justice when there’s an overwhelming number of situations like this. The feeling that there will be no consequences to their actions is often what spurs some people to break into stores and loot them in the first place. And this exacerbates a shortage of available goods in the stores too.

While it would be an unpopular move, the forced cancelation of all events where more than 5 people are meeting together would help to prevent the rapid spread of the coronavirus. This action hasn’t been taken yet, but concerned event organisers have been voluntarily cancelling upcoming and planned events across Canada, the U.S. and the rest of the world.

The thinking is that with fewer people co-mingling, the chance of one infected person becoming 1,000 infected people and multiplying up exponentially from there is dramatically reduced. Even for those people who downplay the potential threat, we all know that when flu seasons hit, half the office can go down with it over a few weeks. Given the 3% plus mortality rate of the coronavirus once it becomes COVID-19, the mortality rate might not move up, but the number infected could prove debilitating on a national level.

With flu-like viruses, they tend to spread quickly and silently. The greatest risk is not so much from the virus itself, but from the authorities failing to realise the growing size of the problem and its potential negative effect on security at a national level.

For instance, despite the fact that the U.S. Centers for Disease Control and Prevention discovered the first case of coronavirus on January 20th in the United States, their President downplayed it as “just fine.” It was only on February 2nd that it was decided to put restrictions on passengers coming from China.

Acting swiftly to prevent a wider spread is how previous virus outbreaks were contained successfully. Whilst this wasn’t done in many countries, the next best thing is to prevent widespread infection of the population. Whilst this is best for the health of the nation, it also has a bearing on national security because the national infection level could potentially shut the country down.

Shutting Down a Country?

Could the coronavirus end up shutting down a country?

To put this in perspective, the virus has a 14-day incubation period. So, anyone found to be possibly infected would need to be quarantined for at least that long.

Where the pandemic risk comes into play is with so many people in Canada become infected at the same time who must all be isolated for 14 days, who keeps the lights on?

For instance, power plants do not run themselves. Even when they’re automated, they still require oversight and occasional repair. People are needed to keep the energy flowing, the lights on, and the ability to fill up at the pumps to keep cars, trucks and buses on the road.

Citizens will be forced to shelter in place -in their homes, most likely. This is because hospitals will be overrun and won’t have the available beds to manage. Most healthcare providers are already operating close to capacity, or at capacity now, which leaves little room for taking on a huge number of new cases. People will need to stay at home and get food deliveries to their door to prevent the spread of the virus to a wide population.

Is the Coronavirus something to take seriously at a national level?

On the balance, the answer is, yes.

If the government response is inadequate to the task, or people display a recklessness towards risking the infection of other people, then infection rates could soar. At this point, the need for isolation would take out key people from important positions that are needed to keep everything running properly.

The skeleton staff would struggle to cope, especially if demand has increased as a result of the virus (true of healthcare,and utility providers when more people stay in their homes during the weekday).

We must hope that things never get that far out of control.

Why Do We Self-Medicate?